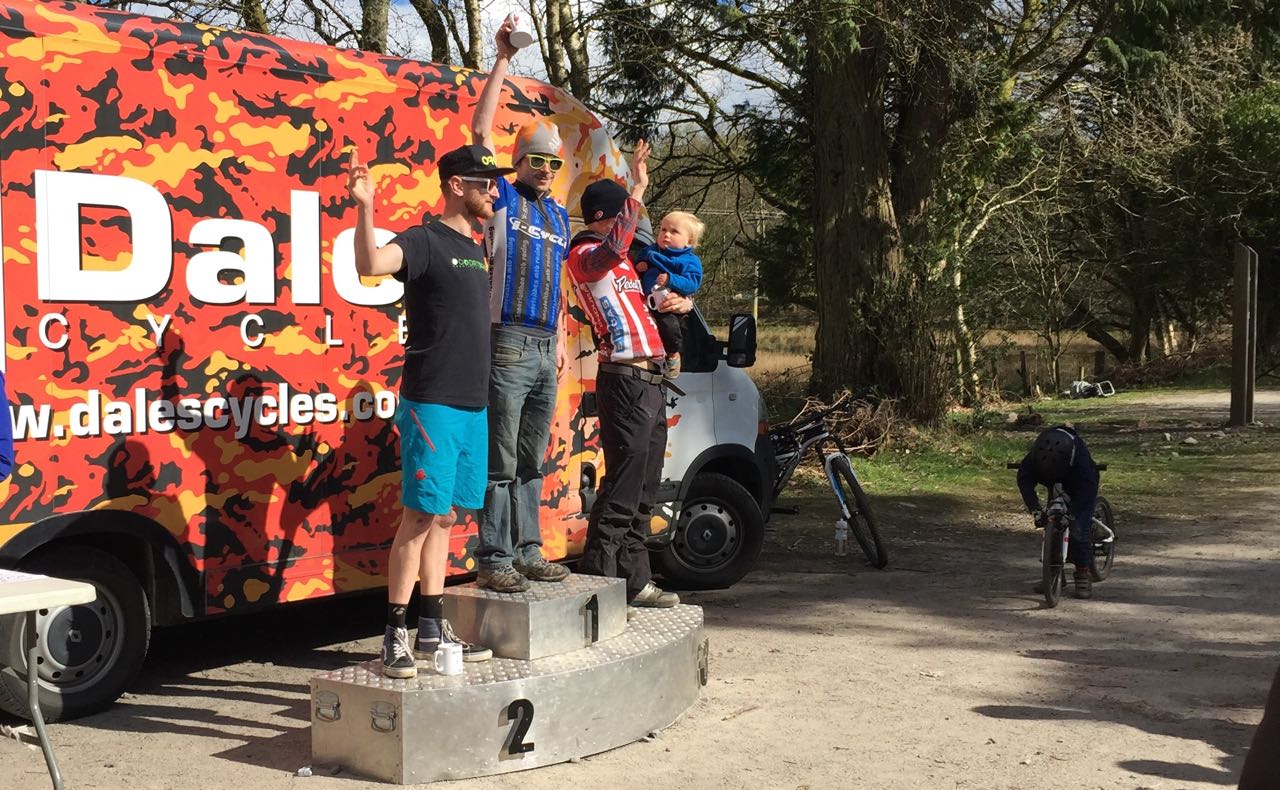 2015 is a year of change for me, at least as far as the bike goes. The little training I do manage (bother!) to do has been focused almost completely on Enduro. I’ve not ridden a road bike since last August, and sessions involve a lot more time doing weights, strength work, sprints, and skills sessions. I planned to enter the handful of Scottish Cross Country rounds which did not clash with Enduro races, but there wasn’t enough to make a good go at the overall title, so the races were to be for training only. This more relaxed approach to XC seems to be working well, and despite the gleeful comments about my hairy legs on the start line, I pulled off a surprise third place in the first round of the SXC at Cathkin Braes.

Round two was to be at Dalbeattie, and with a slightly shorter course to last year, which retained it’s technical character, I was sure I could equal the second place I had here in 2014. I started hard from the gun, making sure to get into the first tight section of boardwalk without getting involved in the melee of the big group. Jack Ravenscroft had a similar idea, cruising past me on the first forestry road. I tucked in behind, and when we got to the next section of forestry road I had a look to see who was around. Rab Wardell and Andy Barlow of Dirt School were both close at hand, and despite riding their trail bikes took good pace into the next section of climb. I knew I had to get 15-20 seconds on them for the descent, so followed Paul Carmichael as he pushed on towards the top of the climb. I got the gap I wanted, with Andy and Rab catching me up as things got flat again.

For the second lap I was mostly on my own, with a bit more of a gap at the bottom of the descent. Apart from dropping my chain towards the end of the gap due to a botched doubling-up of two rock sections, it was fairly uneventful. On lap three three I seemed to ease off a bit, and while I was going slower, Rab went fast and was right behind me going into the fourth lap. Paul Newnham told us that Jack had punctured and withdrawn, so we were now one and two. Again I knew I had to get a gap for the descent, so raised the pace going up the climb to the point where I wondered if I could maintain this pace for a lap and a half. I knocked 50 seconds off my previous lap time, definitely the negative split I would look for at this point in a race.

Going into lap five I knew there was a small gap back to Rab, but not big enough that I could ease off. I kept the pressure on, and apart from the stress of catching back markers in the tight sections, I matched my lap four split time. I crossed the line first, with Rab at 1m 16s, and James Fraser-Moodie at 3m 34s. I am of course very pleased to win, it’s only taken eleven seasons of podium appearances and other good results to get to the top of the box.

It was very interesting to see Rab run me so close on a trail bike that is nearly identical to the one I race Enduro on (29er, carbon, medium travel). While I wonder if he would have been closer with a change to proper XC tyres, it does drive home that modern trail bikes are fantastically versatile. I get the definite feeling that the “I don’t have an XC bike” excuse is redundant. Hopefully we can all convince a few of our Enduro-racing friends to come and give a Scottish XC a go.

Thanks to Emma (who was first in senior women, yah!) for doing my bottles, Steve at I-Cycles for the ongoing support, and all the other people who cheered me on and sent me their congratulations. And thanks to the Morven, Steve Brown, and all the other folks who make these races happen.

Finally, I found out a few hours after the race that my Aunt Dianne had passed away, so this race win is dedicated to her.